White River Balds Natural Area is a preserve in the Taney County, Missouri

POINTS OF INTEREST:
Experience some of the largest glades in the midwest.
See species more common to Texas and Oklahoma.
Enjoy colorful wildflowers all season long.

NATURAL HISTORY:
Just beyond the glitter of Branson the hills and hollows of White River Balds Natural Area appear much the way they did when Harold Bell Wright wrote about this very spot in his 1907 book, The Shepherd of the Hills. Here are some of the finest and largest dolomite glades, known locally as balds, in the Missouri Ozarks. Dolomite glades that sometimes encompass whole hillsides and knobs such as these occur throughout the steeply dissected terrain of the White River basin of southwest Missouri.

These glades harbor many fascinating plants and animals well adapted to the hot, dry and sunny conditions found here. The glades are a visual feast of blooming wildflowers. In the spring visitors can see yellow coneflower, Trelease’s larkspur, and cobea beardtongue – all species whose global range is limited to the Ozarks. Over 200 native plant species have been documented on the natural area. Other showy wildflowers include Missouri evening primrose, pale purple coneflower, narrow-leaf gayfeather, blue wild indigo, prairie dock, and aromatic aster.

Many of the species inhabiting these glades are considered relicts of the Xerothermic or Hypsithermal period. 8,000 to 4,000 years ago the climate of Missouri was hotter and drier and this in combination with aboriginal use of fire allowed for more southwestern species to expand into Missouri. Since then the climate has ameloriated and over the last few thousand years these species have become restricted to glades, especially in the White River Hills region. The Texas mouse, eastern collared lizard, prairie racerunner, Texas brown tarantula, striped bark scorpion, greater road runner, and painted bunting are all animals whose center of distribution is south and west of Missouri but occur here. Plant species more common to the southern plains but found here include smoke tree, stenosiphon, centaury, palafoxia, Ashe’s juniper, and glade buck brush. Some of the smoke trees here are nearly 300 years old.

In the absence of periodic fires, eastern red cedars slowly take over glades and create low diversity cedar monocultures. Historically fires occurred every 3 to 5 years in the glades and woodlands of southwest Missouri. Today the Conservation Department uses cedar thinning and prescribed fire to restore glades.

Most of the large Ashe’s junipers that grew on the glades were harvested by the American Eagle Pencil Company from 1945 to 1948. Ashe’s juniper was prized for its soft, light-colored wood for pencil production. North of the natural area in the nearby Roark Creek valley a number of families homesteaded during the 19th century. Boulder Bald found on the natural area is a landmark mentioned in The Shepherd of the Hills. This natural area owes its existence to the generosity of Ruth and Paul Henning who sold the land at a reduced price to the Conservation Department in 1982. 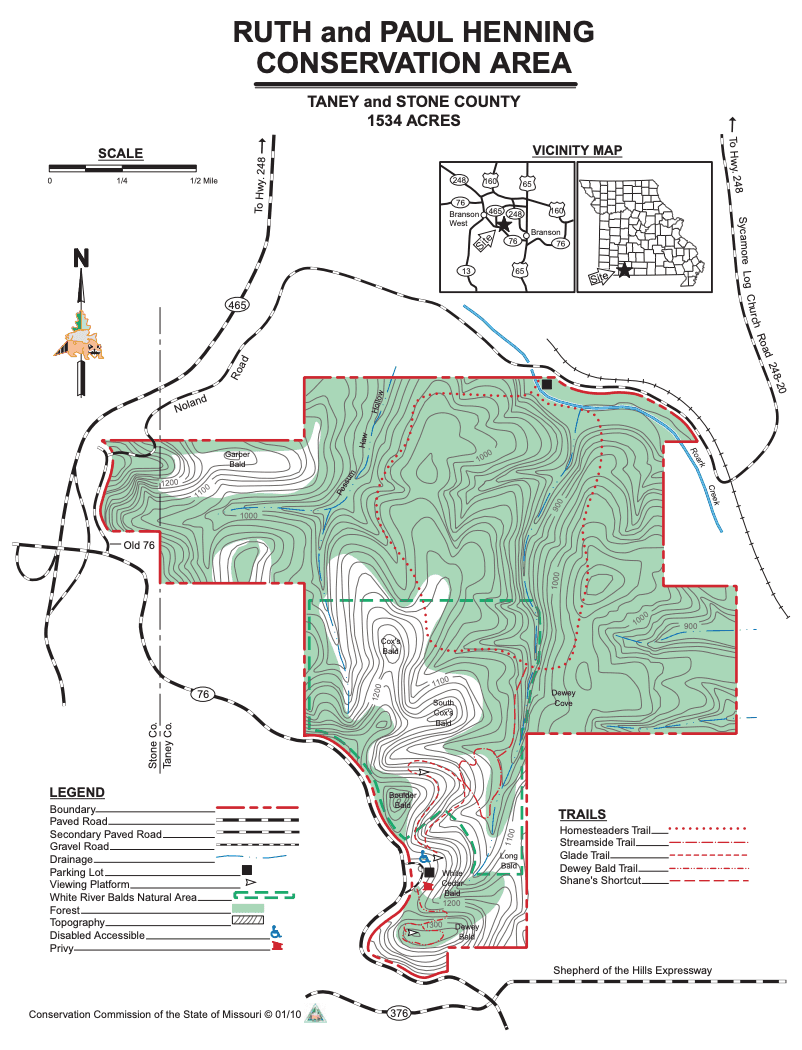 Ruth and Paul Henning Conservation Area is in the White River Hills of western Taney County on the west side of Branson.

Much of this 1,534-acre area consists of steep hills covered with typical upland oak/hickory forest. The forest is interspersed with a series of scenic glades (open desert-like areas), which make up the White River Balds Natural Area.

The glades or “balds,” as local people refer to them, played an important role in the history and folklore of the region. Because post-Civil war vigilante groups often met on the balds, they became known as “baldknobbers.”

Several features of the area were also immortalized in Harold Bell Wright’s book, Shepherd of the Hills, including Dewey Bald, Boulder Bald, a portion of the “trail that is nobody knows how old,” Sammy Lane’s Lookout, The Signal Tree, and Little Pete’s Cave.

Most of the area was donated or purchased from Ruth and Paul Henning. Paul is best known as the creator of the Beverly Hillbillies, Green Acres, and Petticoat Junction television series. It was their wish to keep this beautiful landscape for all to enjoy.

ACCESS INFO
From the intersection of Highway 65 and Highway 76 in Branson travel west and then north on Highway 76 for approximately 5.5 miles to the area entrance on the right (east) side of Highway 76. This is the Ruth and Paul Henning Conservation Area Scenic Overlook that includes a parking lot, interpretive signs, and a trailhead. For a great tour of the natural area, take the Glade Trail, a 1.1 mile hiking trail loop. A longer hike can be had by combining the Glade Trail with the Streamside Trail for a 1.5 mile hike. Hunting is not permitted.