Silver Dollar City is a special attraction in the heartland of America where families can gather together in fun, where traditions are created, memories are shared and where time stops for you to celebrate each other. This 1880s theme park will turn an ordinary day into a best-ever day with fun that awaits you from a spring-time getaway to a Christmas celebration. Experience record-breaking thrills and discover a world of surprises at one of the to things to do in Branson MO. 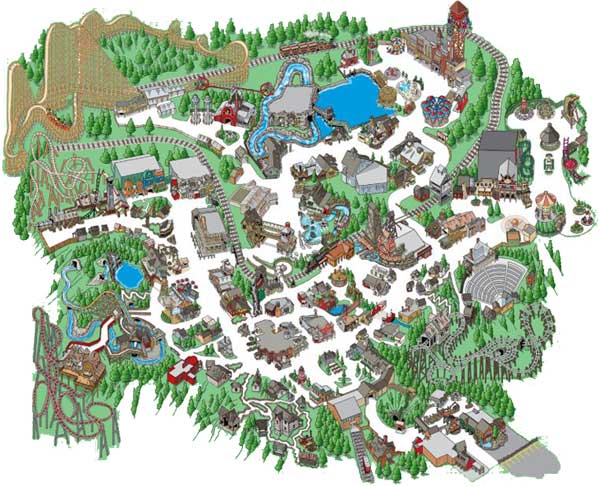 American Plunge – Riders experience a 50-foot (15 m) drop at speeds of 35 miles (56 km) per hour.
Birdle’s Cabin
Electro Spin – Riders sit facing outward with chests against a padded panel while riding a rotational vehicle the spins at high speeds on a 50-foot (15 m) U-shaped track.
Elephant March – Riders sit in an elephant-shaped vehicle that revolves around a central machine. The vehicles also ascend and descend at the press of a button, which is controlled by the rider.
Elsie the Milk Cow – A fake cow with udders that allows guests to pull and retrieve their own “milk”.
FireFall – An eight-story drop tower in the Firemans Landing area.
Fireman’s Flyer – A low flying swing ride for children in the Firemans Landing area.
Fire-in-the-Hole – The park’s first, and oldest, roller coaster. Guests ride in a dark building with scenes that tell of a town set ablaze by the Baldknobbers overnight. Riders then are shifted quickly to avoid trains, fires, and broken bridges. The ride is notable for being the site of the park’s only fatality to date.
Fire Spotter – A family balloon ride in the Firemans Landing area.
Fire Wagon Frenzy – A magic carpet ride themed around a fire wagon in the Firemans Landing area.
Flooded Mine – Guests ride in a dark building that resembles an old broken down mine. The prisoners of the mine have escaped during a flood, and the warden needs the guests’ help in shooting them down. Guests have laser powered guns that count how many times they hit specified targets.
Frisco Silver Dollar Line Steam Train – Guests experience a slow-moving, 2 ft (610 mm) narrow gauge[5] train ride through the park lasting 20 minutes. In the middle of the ride, guests experience a show where uneducated train robbers try their best to rob the train, but guests are saved just in time by the conductor, who was tricked into searching for “Yankees” or “Indians.” During the Old Time Christmas festival, the train is decked-out in lights and becomes the Frisco Sing-Along Steam Train. Also, the train robber act is replaced by Grandpa telling the Christmas story. The attraction uses three 600 mm (1 ft 11 5⁄8 in) narrow gauge[6] steam locomotives, two numbered 13 and 43 built by Orenstein & Koppel in Germany in 1934 and 1938, and one numbered 76 built in 1940 by Kolben-Danek in Czechoslovakia. This is one of the oldest attractions in the park.
The Giant Barn Swing – a Screamin’ Swing that includes two 16 capacity swings on two giant pendulum arms each.
The Grand Exposition Coaster – A small, 20-foot (6.1 m) roller coaster, with speeds up to 20 miles per hour.
Grandfather’s Mansion – Guests walk through a large fun house.

Half Dollar Holler – a kids’ play and ride area.
Happy Frogs – Riders sit in a frog-shaped vehicle that revolves around a central machine. The vehicles also bounce up and down from a combined mechanical/airbag system.
High-Low Silos – Guests sit with a companion and pull themselves up a 20-foot (6.1 m) cable and drop at low speeds as soon as they let go.
Homestead Animal Barnyard – A petting zoo with animals such as goats, chickens, hens, and other farm animals.
The Ladybugs – Riders sit in a bug-shaped vehicle that revolves around a central machine. The vehicles also ascend and descend at the press of a button, which is controlled by the rider.
Lost River of the Ozarks – a whitewater rapids tube ride.
Magnificent Wave Carousel
Marvel Cave – The cave offers two types of tours. The Traditional Cave Tour is a one-hour guided tour through a half mile of lighted passageway. Throughout the tour, geological and historical information is explained. The Lantern Light Tour is a one and a half-hour guided tour through a little over a half mile of unlit passageway. A narrow gauge funicular railway is employed to take visitors from the far end of the cave back to surface level.
McHaffie’s Homestead – a real, hewn-log cabin built in 1843.
Oak Trail School – a 19th-century school house where everyone is invited to pick a desk, sit down and learn about school in the 1800s.
Outlaw Run – Added in 2013; the world’s second steepest wooden coaster and the only one featuring three inversions.
PowderKeg – an S&S launched roller coaster which reused the coaster segment portion of Buzz Saw Falls.
Racing Regatta, Royal Tea Party, Swinging Bridge, and The Mighty Galleon
The Roundabout – Carousel ride themed around dalmatians circling a fire hydrant. Opens in 2015 in the new Firemans Landing area.
Tom & Huck’s River Blast
Thunderation – an Arrow Dynamics mine train roller coaster; one of the largest and fastest in the world currently in operation.
Time Traveler – Added in 2018; an Mack Rides spinning launch coaster.
Up The Ladder – A small drop tower for children. Opened in 2015 in the Firemans Landing area.
Wilderness Church – an old-time church with a view of the Ozark and Boston Mountains of Arkansas.
WildFire – a Bolliger & Mabillard sit down looping coaster with five inversions.
Wings of Wonder – caterpillar and butterfly vehicles rotate around a central mast, and ascend and descend at the press of a button, which is controlled by the rider.

* seasonal hours and subject to change.

We had so much fun here. I had never been and neither had my kids. I was so excited and really wasn’t sure what to expect.

There are 91 next ratings View Next Ratings