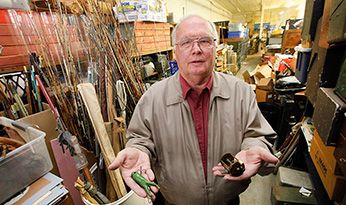 History of Fishing Museum is the largest collection of antique fishing lures, rods, reels, boats and motors entirely collected by one man and his wife. Karl and Beverly White. Karl began collecting at the age of eight. The first lure Karl bought was the James Heddon’s Crazy Crawler (the most expensive lure to produce at the time). The lure is still in the collection today – nearly 70 years later!

The History of Fishing Museum is comprised of more than 40,000 pieces and valued at nearly $5 million. The museum showcases the private collection of Karl & Beverly White and includes lures, rods, reels, boats, motors, and everything else having to do with sport fishing – including one of the first pairs of sunglasses. The collection is considered to be the world’s most complete and diverse tackle collection. While many collectors specialize in one area (i.e. ice fishing) or one company (James Heddon & Sons), the Whites’ collection represents everything that is “collectible” in antique tackle and fishing paraphernalia including the first of many. 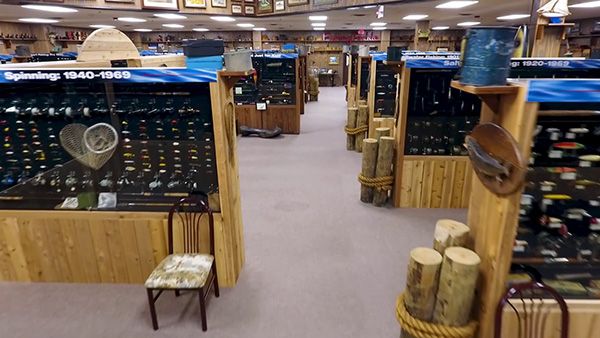 The oldest patented piece in the collection is a Buel Trolling Spoon that was patented in 1852, but the collection also includes fishing artifacts that date back pre-colonial, Native Americans and Eskimos. Newly added to the expansive collection is aquatic dinosaur bones and fish fossils.

Always call ahead to confirm hours of operation