Dick’s 5 & 10 is one of the last of an American Tradition and a Branson icon for over 50 years. We are a path way back in time for those who remember the old-time 5 & 10 and we create new memories for those who have no idea what a 5 & 10 was.

For those of you ready to do some shopping, get ready… As soon as you walks in our store you will be amazed by the sheer volume of what you see – the trains running overhead, the incredible selection of nostalgic and novelty candy, the vastness of the assortment of merchandise, the historic collections and our every changing “Fun Aisle.”

An Adventure Around Every Corner

You can find almost anything you need like gifts, souvenirs, toys, games, hard-to-find old-time candy, housewares, toiletries, paper dolls, linens, dry goods, sewing notions, yarn, greeting cards, crafts and the list goes on. You can bring the whole family because there is something for everyone at Dick’s 5 & 10. 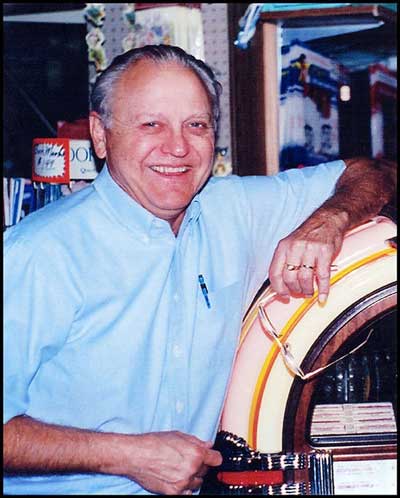 For more than half a century, Dick’s 5 and 10 has been a cornerstone of Downtown Branson and shopping in Southwest Missouri. With unique gifts you won’t find anywhere else, one-of-a-kind collections spanning generations, toys from yesteryear, items for the home, games, hobby supplies, sewing, an aisle of the quirky and fun and so much more, Dick’s 5 and 10 is must-visit during your Branson vacation or day-trip.

Richard L. “Dick” Hartley (1926 – 2006) was born and raised in Springfield, Missouri. After his high school graduation in 1944, Dick joined the U.S. Army for the conclusion of WWII. After the war, Dick was stationed at General Headquarters in Tokyo, Japan. Upon receiving his honorable discharge from the Army, Dick returned to Springfield and subsequently graduated from Drury University with a degree in economics. Due to limited opportunities for employment in Southwest Missouri, Dick made the difficult decision to leave his family and friends and moved to Chicago in 1950 to work for the S.S. Kresge Company. While renting a room at a nearby YMCA, Dick learned the five and dime business from the ground up.

In 1956 Dick accepted a management position with T G & Y Variety stores and moved to Midwest City, Oklahoma. Shortly thereafter, Dick met June Spickard, also a Springfield native, and the two were married in 1959. After being transferred to Norman, Oklahoma, Dick developed a desire to own his own five and dime. Dick and June agreed together that they wanted to take on this challenge. The next big decision, ultimately one of the biggest decisions of their lives, was where to locate their new business.

There was talk of Abilene, Kansas, because of an available building with a favorable lease opportunity. There was also talk of the communities surrounding their hometown of Springfield, Missouri. Ultimately, there was something about Branson, Missouri, that just felt right to Dick and June. Dick believed Branson had the most upside potential of the communities they had considered and the decision was made.

In 1961, Dick’s 5 & 10 opened in beautiful downtown Branson, Missouri. Although the store was small, having only 1,500 square feet of retail space, founder Dick Hartley had a vision of owning and managing a well-stocked variety store, where customers could find the items that meet their needs. 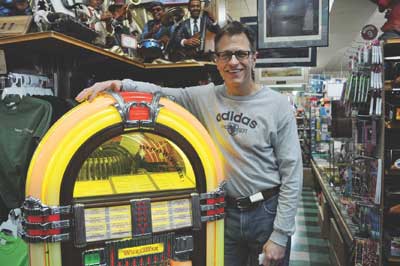 Many lean years followed as Dick built his business. Some in the retail community didn’t believe a Branson five and dime could be successful as recounted in a local newspaper article some years later. As the sole employee for several years, Dick did it all, even constructing many of his own counters for displaying merchandise. He refused to be outworked by the competition. When one of his retail competitors faltered in the early 1970’s, Dick was able to acquire their location on Main Street where the 10,000 square feet store exists today. It was also about that time that Dick began adding collections to his store in an effort to further differentiate Dick’s 5 & 10 from the Branson retail competition. Dick was always looking for an opportunity to learn something new that he could apply in his business.

On December 9th, 2006, Dick closed the store at 9:00 p.m. one last time and peacefully passed away later that evening at the age of 80. Dick’s 5 & 10 remains family-owned and operated with June still active in the business along with her son Steve Hartley, who rejoined the family business in 1993, and son-in-law Dave Montgomery, who joined the business in 2008.

We have to go to Dick’s 5 and 10 each and every time we are in Branson, because we always find unique gifts that we can’t find elsewhere. I give it 5 stars out of 5.

My husband and I LOVE this store. We went in to just look around and came out 2 hours later and a lot lighter on cash. The memories that it brings up from all the items in the store were worth more than anything. We can’t wait to come back!