Ride with us on a 40-mile roundtrip excursion thru Ozark foothills and tunnels. You will learn the history of the area as you cross bridges and trestles. Experience the luxury of rail travel from days gone by. 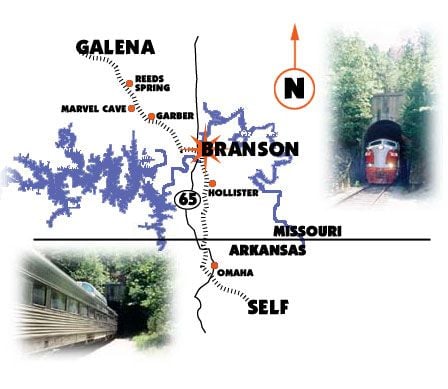 *THE DIRECTION OF TRAVEL CANNOT BE GUARANTEED

THE MISSOURI AND NORTHERN ARKANSAS RAILROAD DISPATCHER DETERMINES THE DIRECTION OF TRAVEL FOR BRANSON SCENIC RAILWAY BASED ON TRACK CONDITIONS, FREIGHT TRAFFIC, OR ANY SAFETY CONCERN.

America’s romance with the vintage passenger train lives on through excursions on the Branson Scenic Railway aboard a collection of unique passenger cars that travel through the foothills of the Ozark Mountains. This one hour 45 minute trip takes passengers through tunnels, over trestles, and through the southwest Missouri or northwest Arkansas wilderness that is still home to much wildlife and to the ruins of long-ago communities now named only on railroad maps.

The historic 1905 depot in downtown Branson, just one block west of Lake Taneycomo (formerly the White River), is the headquarters for the Branson Scenic Railway. The depot houses the administrative offices, the reservation and ticket office, and a gift shop that carries many train items.

Traveling on a working commercial railroad line, the train’s direction of travel (depending on freight traffic and/or track conditions) is determined by the Missouri and Northern Arkansas Railroad just prior to departure. At that time, the train will go either north or south. (All excursions depart from the old depot.) The northern route goes as far as Galena, Missouri, to the James River Valley; and the southern route extends into Arkansas to the Barren Fork Trestle. Three to four times daily, depending on the season, Branson Scenic Railway explores territory inaccessible by automobile and offers views that are unattainable by any other means of transportation. A lively narration points out the landmarks such as Crest Tunnel, Cricket Tunnel, Walnut Creek Trestle, Barren Fork Trestle, and Tharp’s Grade; and the extinct communities of Gretna, Melva, and Ruth are described as they were in the early 20th century. Also included in the narration is a description of the wildlife and landscape and an outline of the railroad’s role in shaping the Ozarks. The routes take passengers about 20 miles from Branson before reversing direction and returning on the same tracks.

Although there is plenty to see through the broad windows and the three dome cars with their panoramic views, visiting each car can occupy much of the excursion. Seating is unassigned, and passengers are invited to tour the entire train. (Since boarding numbers are issued in the order the reservation is made, it is suggested that reservations be made as early as possible.) The cars have been restored and refurbished to offer the same first-class experience and ambiance to today’s passengers as to those they carried fifty years ago. There is also a concession area aboard the Silver Lake car that offers refreshments for purchase.

May through December on Saturdays at 5:00 PM, a dinner train is offered. A four-course candlelight meal is served, and the guests are treated to traditional style dining that was the ultimate experience long ago when riding on the rails. (Seating is limited on the dinner train; reservations are required.)

The comfort of the vintage passenger cars is quite a contrast to the harsh realities the railroad pioneers found when they undertook bringing rail service to the Ozarks. Laying the tracks for the White River Railway was possibly the most difficult construction task ever undertaken in the Ozarks. It meant creating hundreds of miles of level surface where there were only rugged hills and valleys. It meant stretching tall trestles across valleys and blasting long, damp tunnels through mountains of solid rock. The project required thousands more workers and millions more dollars than railroad construction in a more accommodating terrain. But its difficulty is surpassed by the accomplishment and the opportunities the railroad provided the struggling Ozarks pioneers.

The railway was built in two sections: a northward line beginning at Batesville, Arkansas, and the other going south from Carthage, Missouri. Construction began in January 1902, and the final spike was driven on December 29, 1905, which joined the northern and southern sections. The 239 miles of track cost more than $12 million—about six times normal rail construction costs. According to the White River Railway, an intricately detailed book by Walter M. Adams, in October 1901, laborers were paid $1.25 to $1.50 per day, and men with teams were paid $2.50 to $3.00 per day. This helps to put the total cost of the railway in perspective for that time in history.

The town of Branson is a product of the railroad. Adams writes, “It started out, as did most Ozark towns, as a country store owned by one Rueben S. Branson who was granted a post office in 1882 while on Bull Creek, north or in this case down river from the present location. In 1883 Branson moved to the confluence of Roark Creek and the White River. Here speculators established a small town called ‘Lucia’ and on May 2, 1901, the post office was renamed Lucia. With the arrival of the railroad, rival land speculators got busy and bought up land to the west and north of Lucia. This was the Branson Town Corporation with Charles R. Fulbright as president. Fulbright also held the title as ‘immigration agent’ for the Iron Mountain Railroad. The official plat of Lucia was filed on October 2, 1903 while that of Branson was filed October 26, 1903. When it became obvious that the railroad would run only through the Branson Town Company’s plat the land owners of Lucia sold their interests to the town company. Both ‘towns’ maintained their own newspapers for a time, the Lucia ‘Locomotive’ and the Branson ‘Echo’. On June 11, 1904, the post office was renamed ‘Branson’ and the adjoining communities were finally incorporated as Branson April 1, 1912.”

The construction of the White River Railway in the early 1900s made the area accessible for tourists and is largely responsible for the development of Branson and the Ozarks as a tourism destination. Before the area’s economy was based on tourism, the railroad served a traditional industrial purpose, which continues to this day.

The railroad is known as the White River Route. The route crosses the White River in Branson, now Lake Taneycomo, and then runs along side of it after taking a fifty-mile “short cut” over the Ozark Mountains. This was part of the Missouri Pacific Railroad between Kansas City, Missouri, and Little Rock, Arkansas. It became a part of the Union Pacific after the UP bought the MOPAC. The Missouri and Northern Arkansas Railroad now operates the line. In 1993, the Branson Scenic Railway was formed, and through a lease arrangement with the MNA, runs excursions through this historic route March through December.